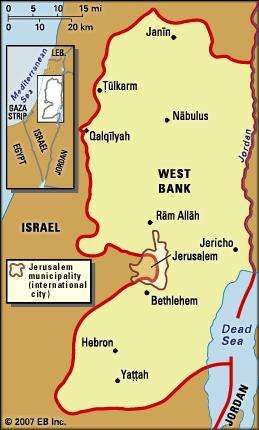 Jericho, Arabic Arīḥā, town located in the West Bank. Jericho is one of the earliest continuous settlements in the world, dating perhaps from about 9000 BCE. Archaeological excavations have demonstrated Jericho’s lengthy history. The city’s site is of great archaeological importance; it provides evidence of the first development of permanent settlements and thus of the first steps toward civilization. 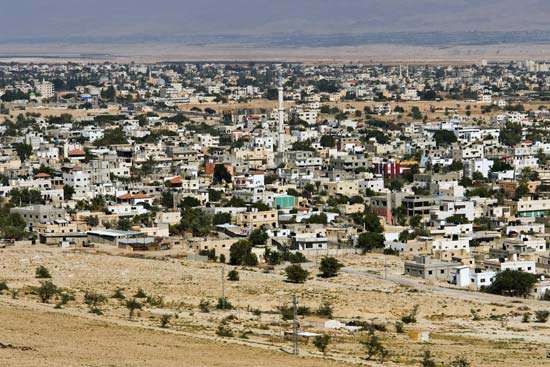 Traces have been found of visits of Mesolithic hunters, carbon-dated to about 9000 BCE, and of a long period of settlement by their descendants. By about 8000 BCE the inhabitants had grown into an organized community capable of building a massive stone wall around the settlement, strengthened at one point at least by a massive stone tower. The size of this settlement justifies the use of the term town and suggests a population of some 2,000–3,000 persons. Thus, this 1,000 years had seen movement from a hunting way of life to full settlement. The development of agriculturecan be inferred from this, and grains of cultivated types of wheat and barley have been found. Jericho is thus one of the places providing evidence of very early agriculture. It is highly probable that, to provide enough land for cultivation, irrigation had been invented. This first Neolithic cultureof Palestine was a purely indigenous development.

These occupants were succeeded about 7000 BCE by a second group, bringing a culture that was still Neolithic and still not manufacturing pottery, though it was not indigenous. This occupation probably indicates the arrival of newcomers from one of the other centres, possibly in northern Syria, in which the Neolithic way of life based on agriculture had developed. This second Neolithic stage ended about 6000 BCE.

For the next 1,000 years there is little evidence of occupation at Jericho. Only about 5000 BCE did Jericho show the influences of developments that had been taking place in the north, where an ever-increasing number of villages had appeared, still Neolithic but marked by the use of pottery. The first pottery users of Jericho were, however, primitive compared with their predecessors on the site, living in simple huts sunk in the ground. They were probably mainly pastoralists. Over the next 2,000 years, occupation was sparse and possibly intermittent.

At the end of the 4th millennium BCE, an urban culture once more appeared in Jericho, as in the rest of Palestine. Jericho became a walled town again, with its walls many times rebuilt.

About 2300 BCE there was once more a break in urban life. The nomadic newcomers, consisting of a number of different groups, were probably the Amorites. Their successors, about 1900 BCE, were the Canaanites, sharing a culture found the whole length of the Mediterranean littoral. The Canaanites reintroduced town life, and excavations have provided evidence both of their houses and of their domestic furniture, which was found in their tombs as equipment of the dead in the afterlife. These discoveries have indicated the nature of the culture that the Israelites found when they infiltrated into Canaan and that they largely adopted.

Jericho is famous in biblical history as the first town attacked by the Israelites under Joshua after they crossed the Jordan River (Joshua 6). After its destruction by the Israelites it was, according to the biblical account, abandoned until Hiel the Bethelite established himself there in the 9th century BCE (1 Kings 16:34). Jericho is mentioned several other times in the Bible. Herod the Great established a winter residence at Jericho, and he died there in 4 BCE. Excavations conducted in 1950–51 revealed something of Herodian Jericho: a magnificent façade along the Wadi Al-Qilṭ is probably part of Herod’s palace, and its style illustrates Herod’s devotion to Rome. Traces of other fine buildings can be seen in this area, which became the centre of Roman and New Testament Jericho, approximately 1 mile (1.6 km) south of that of the Old Testament town. Jericho of the Crusader period was on yet a third site, a mile east of the Old Testament site, and it was there that the modern town would later develop.

Old Testament Jericho has been identified in the mound known as Tall Al-Sulṭān (at the source of the copious spring ʿAyn Al-Sulṭān), which rises 70 feet (21 metres) above the surrounding plain. A number of major archaeological expeditions have worked at the site, notably in 1952–58 under Kathleen M. Kenyon, director of the British School of Archaeology in Jerusalem; one of the main objectives has been to establish the date of the town’s destruction by the Israelites—a matter of importance for the chronology of the Israelite entry into Canaan. Most of the town of the period, including the whole circuit of the town walls, has been removed by erosion; enough survives to show only that there was a town of the period. This may have been destroyed in the second half of the 14th century BCE, but evidence is too scanty for precision. The site was then abandoned until the Iron Age. Little trace has been found of the 9th-century-BCE occupation attributed to Hiel, but there was a sizable settlement in the 7th century BCE, ending perhaps at the time of the second Babylonian Exile in 586 BCE. The site was then finally abandoned, and the later Jerichos grew up elsewhere.

A particularly important remnant from Umayyad rule is the remains of the Khirbat al-Mafjar, a remarkable 8th-century building complex situated in the Wadi Al-Nuwayʿima, some 3 miles (5 km) north of Jericho. The complex, which originally included a palace, mosque, and bathhouse, was damaged by an earthquake shortly after it was begun and was never completed. Among the best-preserved of its remains are the exquisite mosaic panels and pavements for which the complex is renowned. Although the identity of its patron has been disputed, it has been associated with both Hishām ibn ʿAbd al-Malik (reigned 724–743) and his nephew, the controversial caliph al-Walīd ibn Yazīd (reigned 743–744). 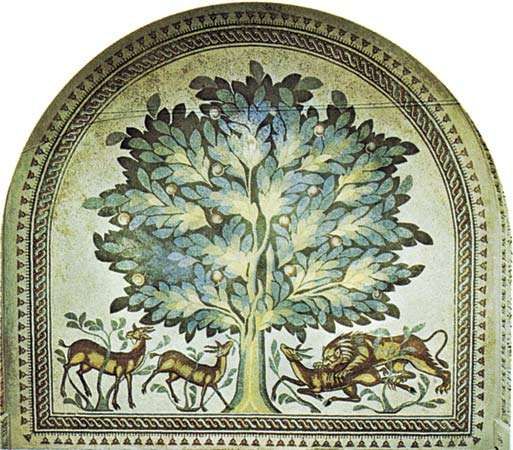 A floor panel mosaic depicting gazelles and a lion from the 8th-century Khirbat al-Mafjar complex, several miles north of Jericho in the West Bank.Micha Bar-Am/Magnum

A minor village in Ottoman times, Jericho became a winter resort after the British mandate over Palestine was established in the early 1920s. The city underwent major expansion, however, after its incorporation into Jordan in 1949. The establishment in the neighbourhood of two enormous camps of Palestinian refugees following the establishment of the State of Israel in 1948 brought great activity to the town, which was largely rebuilt; the area of the oasis was expanded by irrigation. The Israeli occupation of the city following the Six-Day War of June 1967, however, resulted in the dispersal of much of the refugee population (see Arab-Israeli wars). Jericho was one of the first of the cities and towns evacuated by Israeli forces and turned over to Palestinian administration in the wake of the 1993 Oslo Accords. Pop. (2007) 18,346.

Knights TemplarThe Chivalric Orders are a set of three Orders culminating in the grade of Knight Templar, and controlled by that body. This body is markedly different from its foreign counterparts, in that it exhibits a paramilitary structure and outlook END_OF_DOCUMENT_TOKEN_TO_BE_REPLACED

Nicodemus helping to take down Jesus’ body from the cross (Pietà, by Michelangelo).   formerly called the ACTS of PONTIUS PILATE. [Although this Gospel is, by some among the learned, supposed to have been really written by Nicodemus, who became END_OF_DOCUMENT_TOKEN_TO_BE_REPLACED

The Book of Joshua marks the fulfillment of the Exodus of the Israelites from Egypt, for God fulfills his promises to Joshua, the successor to Moses, by leading them to the Promised Land. With God’s help, the tribes of Israel united as END_OF_DOCUMENT_TOKEN_TO_BE_REPLACED